The Best Local Spots Near Every Playoff Ballpark | Sports Illustrated 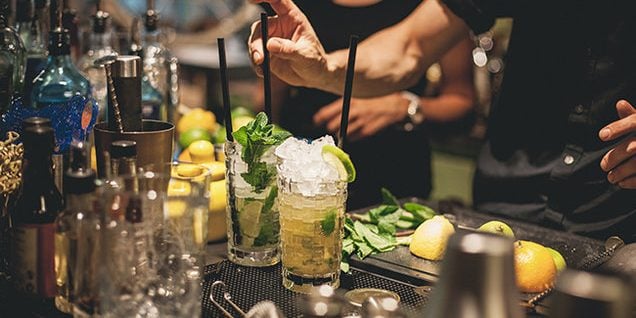 If you’re a fan of any of the eight MLB teams still playing and are lucky enough to attend a playoff game, congratulations! That’s awesome. (Unless you’re a Red Sox fan in which case it’s looking like it could be a very sad scene at Fenway on Sunday). You’ll need to plan out your eating and drinking schedule accordingly. The lines inside the stadiums are going to be extremely intimidating and frustrating to deal with. So, if you don’t want to get to the stadium as soon as the gates open and get right in the food lines, then consider finding food options around the stadium.

Regardless of whether it’s a dramatic win or a heart wrenching loss, sometimes all you want to do is get to the nearest bar. (I did not do this after attending the Mets’ brutal Game 4 World Series loss to the Royals, instead riding the subway home for an hour amid a crowd of sad people shouting f-bombs. I should have given myself an hour to cry in a bar—or at least sob into a platter of chicken fingers).

We pulled three spots nearby each MLB playoff stadium to attend either before or after the game. The idea here is that these are places you go to if you’re attending the actual game, but a good amount of these places work for watching the game as well (though some are swankier or more low-key spots for afterward). In order to get the following results, we talked to data scientists at Yelp.com, who looked for bars on Yelp mentioning the team name or “baseball” in reviews. All of the businesses on the list are within 1 mile of their respective team stadium.

The Basics: If you’re looking to class up your playoff experience, stop here before for some fancy cocktails, or afterward if the game has given you a reason to celebrate and you want to do so somewhere that’s not an overly-packed and casual sports bar.

The Reviews: From 8/20/2017: “We were impressed instantly by the dark, yet sophisticated decor.” From 8/27/2017: “We had stopped before Lady Gaga just to have drinks, and it has a very nice atmosphere. Long bar with seating, and then tables and chairs everywhere. There was a large piano so I am guessing later at night there would be music. The drink menu is extensive and all the drinks are made fresh.” From 11/12/2016: “Really love this place! It’s such a cool swanky little bar to grab drinks before or after dinner!”