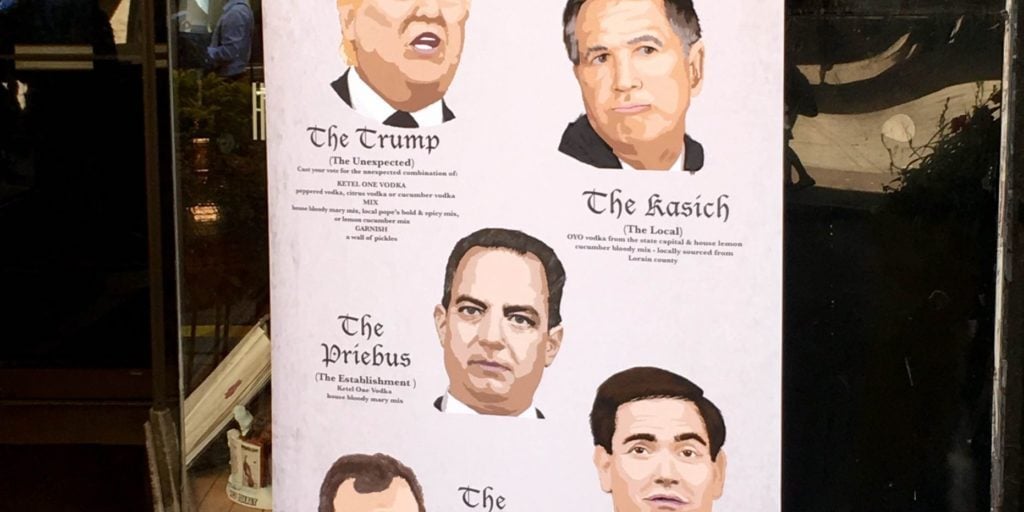 CLEVELAND – Trump’s wall has come to Cleveland – and it’s made of pickles.

The most popular drink on The Society Lounge’s brunch menu this week, “The Trump,” is a high-quality orange-tinted Bloody Mary garnished with its very own “wall of pickles.” The cocktail is one of several politically themed drinks at the restaurant on East 4th Street and among the myriad irreverent Republican-themed items being sold across Cleveland during the GOP convention.

Just up the street, you can find an array of street vendors hawking hats, shirts, buttons and bumper stickers with the “Make America Great Again” phrase – and a variety of anti-Hillary Clinton messages, the most popular of which is “Hillary For Prison” and several others of a far more vulgar variety.

One of those vendors, Bob Alexander, journeyed from Detroit with his custom-made buttons.

Alexander estimated there were between 80-100 different limited-edition buttons with Trump’s likeness. The art can take him anywhere from two hours to two weeks to finalize, he said. Alexander produces the buttons for a living, under the moniker Guard Frog Designs, and he came to Cleveland hoping for a brief surge in sales.

Sitting at his table near the curb for 12-14 hours each day, he said business has been good.

All the merchants FoxNews.com talked to said they were pleased with the week’s sales numbers, and two young entrepreneurs from St. Augustine, Fla., are banking on the bucks to help jump start an app business.

Hayden Whetstone and Chase Grause flew into Cleveland on Sunday to set up their Trumpy Socks stand. Whetstone and Grause claim the long black and white socks – bearing Trump’s image – will “Make Feet Great Again.” And though they profess to have supported Trump since the beginning, they also said they drew inspiration from Airbnb, which sold politically themed cereals to raise cash to bail the then-burgeoning company out of debt.

Back at The Society Lounge, bar manager Leanne Kubiez has kept busy during convention week mixing up The Trump and other Bloody Marys. There’s a drink named for RNC Chairman Reince Priebus – The Priebus (The Establishment) is made with standard Ketel One Vodka and house Bloody Mary mix; New Jersey Gov. Chris Christie has The Christie (The Strong), featuring overproof vodka; Ohio Gov. John Kasich is the star of The Kasich (The Local), made from entirely locally sourced ingredients.

The Trump? Well that’s more of a build-your-own drink – but for a reason.

“He’s kind of all over the place,” Kubiez said.

There’s only one drink on the menu that hasn’t been in demand.

*All tabs have a 20% gratuity added to them.